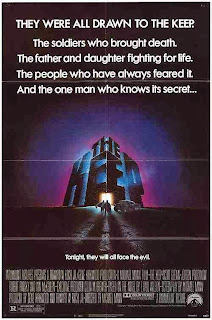 F Paul Wilson’s novel ‘The Keep’ is a well-constructed genre-bender that throws Nazis, ancient slumbering powers suddenly awoken, and the vampiristic guardians of said powers into the mix and dives for cover as all hell breaks loose. Think James Herbert’s ‘The Spear’ with an A-level in History and a penchant for Wagner. It’s a fun read and the only real criticism I can make is that it occasionally gets bogged down in its own mythology.

Michael Mann’s film ‘The Keep’ is a curate’s egg, part of which was hard boiled, part of which was scrambled, and none of which looks quite right when it’s thrown on the plate next to the overcooked slice of ham that stands in for acting performances, the hill of beans that nobody gave a shit about when it opened, and the black pudding of the special effects. It’s only my use of breakfast ingredients by way of an analogy that stops me from calling it a dog’s dinner.

‘The Keep’ is a lunatic fucking mess, and how and why that’s the case – particularly as it’s the product of a director renowned for precision, intelligence and a meticulous application of his craft – would make for a pretty chunky article in its own right. Go here for an interview with Mann published in December 1983, just as the film opened to critical brickbats and audience indifference – the warning signs are already evident. It’s clear that Mann doesn’t have much time for Wilson’s novel, and that he wants to transmogrify what is essentially a horror story into a fairy tale full of surreal logic that will sweep the audience away as if they were in a dream. Uh-oh. His open admission of junking storyboarded sequences and rewriting scenes up to the day of shooting epitomises the kind of directorial approach from which no good can come.

But that’s only part of the problem. Here’s the main issue: Mann’s original cut was three and a half hours. The arc-lit slab of what-the-fuckery unleashed by the studio clocks in at 96 minutes. I’ve never seen the original version – and between Mann disowning the film and some issues around the rights to Tangerine Dream’s haunting score – I doubt any of us ever will, so I can only speculate that the missing hour and fifty minutes or so contained one or more of the following: narrative coherence, exposition, back story, character arcs, details pertaining to Graecken (Scott Glenn)’s Wagnerian journey back to the keep. Take another look at that interview: Mann states that the business with the Wehrmacht detachment accounts for about a fifth of the movie, with the focus mainly on Graecken.

This is a good moment to roll out a plot synopsis, but even with Wilson’s novel as a touchstone, this is no easy task. The first half hour or so is fairly easy to parse: a platoon of Wehrmacht soldiers arrive at a Carpathian village to defend a potentially strategically important pass. Their leader, Captain Woermann (Jurgen Prochnow), is the archetypal “good German”, tired of the war and happy to be out of the theatre of conflict. Woermann discovers a keep older than the village, whose walls are inset with over 180 strangely formed crosses (they actually look more like oversized rivets) made, he is informed, of nickel. A couple of soldiers on sentry duty obviously have some knowledge of metallurgy since they quickly cotton on that the crosses are silver and, with an eye towards a post-war nest egg, begin to pry them out of the walls. This is a big mistake. An Ancient Evil Is Awaken. Said ancient evil starts laying waste to the platoon. Upshot of which, SS officer Major Kaempferr (Gabriel Byrne) is despatched to the town to quell what he believes is partisan activity. An ideological disparity between Woermann and Kaempferr is evident from the outset.

Things start to get a little wonky at this point. As the Ancient Evil Is Awakened, the aforementioned Graecken comes awake in a small Greek fishing village and immediately hires a boat. Now, Greece to the Carpathian mountains is approximately 950 miles (1500km) – this during wartime, through occupied territories. And yet Graeckan’s journey seems to consist of: skiff by sunset, blag his way past some guards, hello folks I’m back at the village. Also, even if you start out from a coastal town, Greece to Carpathia is an overland route, the Aegean being bordered by Greece and Turkey.

The temptation to pedantry arises during the next wonky narrative development. Woermann and Kaempferr find a supposedly Glagolitic inscription in the keep (its actually Cyrillic, therefore any of the villagers could have translated it, but hey ho) and it’s deemed appropriate for Jewish historian and former resident of the village Dr Theodore Cuza (Ian McKellen) and his daughter Eva (Alberta Watson) to be released from Buchenwald and shipped over to the village to help decipher it. Incidentally, Buchenwald to the Carpathian mountains is also a 1500km journey, which Cuza and Eva seem to make in the blink of an eye. Also, they look very well presented for two Jews who’ve been languishing in a concentration camp. Watson in particular, all neatly tailored clothes and well-conditioned bouncy hair, looks like she’s just stepped out of a House of Fraser commercial.

Meanwhile, the Ancient Evil has manifested itself as a kind of red-eyed smoke demon and intervenes when a couple of SS dudes try to have their wicked little way with Eva. It then makes contact with her father, playing on Cuza’s hatred of Nazism in order to secure his assistance. As the demon – name of Molasar, y’all – incrementally becomes more powerful, Graecken hits town and, pausing only for some energetic bedroom athletics with Eva, squares up for a good vs evil smackdown.

In its 96 minute incarnation, ‘The Keep’ is reminiscent of one of those three-step plans where the first and third step are clearly defined, but the massively important middle stage remains nebulous. You know the kind of thing:
1) Design product
2) ???
3) Become rich.

Yeah, ‘The Keep’ ends with a laser light show.

And yet, partly buried in all the silliness, partly excised from around it, there’s a bloody good movie. Sure, there are problems that I doubt even the full three and a half hour version can overcome – there isn’t a single good performance (even McKellen struggles to build a character), and only one of the various stages of Molasar’s transformation from smoke demon to golem is remotely scary – but I’d like to think that a version of ‘The Keep’ exists where the mythology is expounded upon coherently, the ideological divide between the key German characters is represented by something more than a couple of minutes of shouting and a gunshot, and the relationship between Graecken and Eva is deeper and more meaningful than the softcore writhings that seem to have wandered in from a Zalman King production. A version of ‘The Keep’ where the incomprehensible fog-enshrouded extravaganza of the finale is given enough context to emerge as a mythic and awe-inspiring denouement. A little faith can go a long way.
Posted by Neil Fulwood at 5:16 PM