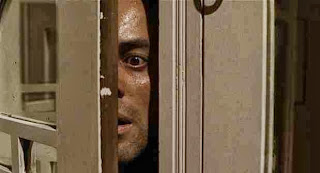 ‘Films to Keep You Awake’ was a 2006 Spanish TV project that showcased the work of six established genre directors. Akin to the American show ‘Masters of Horror’, but with feature-length running times and arguably better production values, the films easily transcend the small screen. No surprise when you consider the talent involved: Jaume Balaguero, Narcisco Ibanez Serrador, Mateo Gil, Enrique Urbizu, Paco Plaza and Alex de la Iglesia. Balaguero and Plaza co-directed ‘[REC]’, with Plaza helming the sequels; Gil co-wrote ‘Tesis’ and ‘Open Your Eyes’ for Alejandro Amenabar before striking out as a director; Urbizu made the taut revenge thriller ‘Box 507’; Serrador is probably still best known for ‘Who Can Kill a Child?’, one of the jewels in the crown of last year’s Winter of Discontent season; and if Agitation fave de la Iglesia needs an introduction then you simply haven’t been paying attention.

Although there’s not one dud amongst the half dozen films – even Balaguero’s derivative ‘To Let’ delivers tension aplenty – it’s de la Iglesia’s ‘The Baby’s Room’ that emerges, by a short head, as the standout. I’d probably pick Plaza’s ‘A Christmas Tale’ as its closest in terms of atmosphere and directorial verve … and with the season of goodwill just a couple of months away, keep an eye out for it as part of this year’s Winter of Discontent.

The set-up is simple: sports writer Juan (Jaiver Guiterrez), his wife Sonia (Leonor Watling) and their infant son have moved into a big old house in a reputable neighbourhood and stretched themselves to the limit in terms of mortgage and renovation work. Juan’s snobbish but well-meaning sister visits and drops off a box full of hand-me-downs, including a baby monitor. With their child occupying a room separate from theirs, Juan and Sonia agree that this is at least useful. One night Juan wakes up, glances at the monitor and sees a stranger sitting beside their child’s cot. 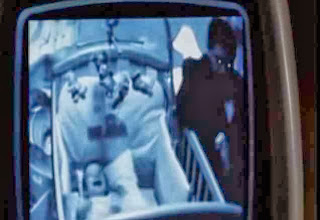 A simple shot, in grainy black-and-white, the stranger’s eyes rendered glaringly inhuman by the poor resolution. A simple shot – no editing tricks, no dramatic motif on the soundtrack, no immediate cut to the child’s room – and yet brutally effective. I don’t have children, I don’t want children, hell I don’t even like kids that much, but that shot just fucks me up in a way that so many horror films try to do but fail. You don’t need to be a father to feel the fear.

As anybody would, Juan goes pelting hell-for-leather into the baby’s room. Empty. Cold comfort. He calls the police. As anybody would. The attending detective is sympathetic, but with no physical evidence of an intruder and no locks forced, there’s nothing he can do. Already, de la Iglesia pitches his film in utterly realistic terms. Juan behaves exactly as a real person, not a movie character, would. The detective responds with the bland pragmatism of an actual career cop. Sonia responds with the terrified maternal instinct of a new mother. The translation of Juan’s experience to his workplace (he’s distracted; he misses deadlines) is met with the bullish indifference that any real-life boss would evince.

It might seem like a vacuous comment, but the simple expedient of characters acting like real people rather than ciphers in the service of a join-the-dots scripts is something to be praised. De la Iglesia’s genius is that he never deviates from this; even when Juan seeks the advice of agoraphobic fellow journo Domingo (Sancho Garcia) on the supernatural phenomenon he’s experienced, the script paints Domingo not as the incarcerated idiot savant of preternatural exposition a la Craig Fairbrass in ‘White Noise: The Light’, but an informed intellectual who seeks to rationalise. Hence a measured and challenging discussion based around the Schrödinger’s cat paradox.

Pretty impressive, but de la Iglesia ramps up the drama by counterpointing Juan’s investigation into the haunting with Sonia’s increasing concerns about his mental state. The situation swiftly escalates to the point at which Sonia doesn’t feel safe around him and decamps, with the child, to their parents. In a Hollywood production, this would be the point at which the audience’s emotional involvement would be considered non-incentivized (hey, the kid’s safe, where’s the threat?) but de la Iglesia is only just getting started. 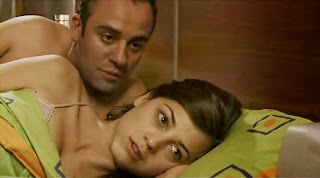 Very quickly, Juan arrives at a means of recording the supernatural forces at work in his house. Looking back at the estate agent’s records, he discovers the property has been sold five times in three years. The why is pretty much a given at this point. Then de la Iglesia flips the whole thing on its head. So many haunted house movies are bound up in something terrible that happened a long time ago. What de la Iglesia trades in is something quite different and by the time Juan figures it out, Sonia and their child are on their way back.

‘The Baby’s Room’ takes the idea of a haunting, plays with it until the audience are secure in what’s happening, and then pulls the rug. And the thing is, when you watch it a second time, all the pointers are there, the philosophical noodlings between Juan and Domingo are freighted with implication, and the denouement is horribly inevitable.

Just as the most effective horror movies tease you with deliverance only to abandon you to the unspeakable, ‘The Baby’s Room’ intellectualises and unfurls exposition and never once cheats on its own very specific rules, then takes you to a place that was always inescapable.
Posted by Neil Fulwood at 11:33 PM

Let me get it straight.

I tried everything from stocks & forex to internet marketing and affiliate networks.. I even made some money but then lost it all when the stock market went south.