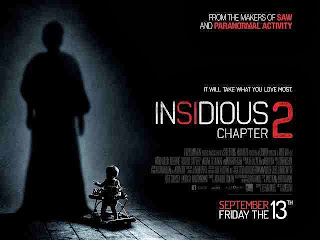 I’m at a loss how to begin this review.

Do I talk about the staggering self-importance of the word “chapter” in the film’s title, and how absurd it is that scripter Leigh Whannell aims for such a degree of literary aspiration when his screenplay is sloppy, unfocused and studded with truly dreadful dialogue?

Do I mention the spectacular anti-talent necessary to spend three times the amount that the original cost and emerge with a piece of work that looks cheaper and shoddier all round?

Do I bemoan the fact that the essential flaw in, ahem, “chapter one” – the unsuspenseful final twenty minutes set in The Further – is pretty much the raison d’etre here, and that a lot of noise and frenetic movement aren’t enough to paper over an even greater dearth of suspense this time round?

Do I basically rehash the final analysis of last night’s review and urge James Wan to give Whannell the heave-ho and start working with writers who can actually write – y’know, like he did on ‘The Conjuring’?

Do I shake my head slowly and sadly at the laboured final scene that takes its begging bowl to studios and audiences alike and asks you to spare a penny for ‘Insidious Chapter 3’ (or ‘Volume 3’ or ‘Insidious: The Triptych’ or whatever pompous moniker it chooses for itself)?

Or do I describe one particular scene and let it stand as an example of how utterly terrible ‘Insidious Chapter 2’ is?

Yeah, let’s go with the latter. Here’s the set-up: Josh (Patrick Wilson) is acting very strangely following his incursion into The Further at the end of the first film; Renai (Rose Byrne) is having difficulty adapting to life at Lorraine (Barbara Hershey)’s house – where they’ve relocated while a police forensics team is busy at their home – and painfully unfunny comedy psychic investigators Specs (Leigh Whannell) and Tucker (Angus Sampson) have been approached by Carl (Steve Coulter), an associate of their erstwhile employer Elise (Lin Shaye). Carl’s a medium who communicates with the spirit world by throwing dice. Information received at a séance directs Carl, Specs, Tucker and Lorraine to an abandoned hospital where Lorraine used to work and where – she only realises in twenty-year retrospect – she once saw a ghost. This quartet enter a dilapidated building which doesn’t seem to be locked up, fenced off or have any security arrangements in place – a building whose dank and decaying corridors are littered with expensive pieces of medical equipment that nobody seems to have thought of transporting to the new hospital – and, whaddaya know, they come across a file room that’s still full of patient records (confidentiality issues, anyone?) The first file they open is that of Lorraine’s former patient, a man – she recounts – who committed suicide by jumping from an upper window; a man – she further recollects – who was admitted after attempting to castrate himself. The file gives this troubled individual’s address and Whannell’s script immediately takes us to a big old house as dank and dilapidated as the hospital. It’s sat empty these twenty years … empty, that is, but for the couple of dozen corpses all sat upright in a basement room and covered with dust sheets. Carl and co. discover said bodies behind a false wall, the stink of putrefaction only assaulting them when they slide said false wall open, because, y’know, twenty years of rotting corpses wouldn’t stink out an entire house, would they? And, hey, they’d all still be in a sitting position and not just a pile of bones, amiright? And Carl’s contact in the spirit world could just have given him the address and not go through all the rigmarole of visiting an abandoned hospital whose administrators have no concept of information governance, non? And …

Oh fuck it. ‘Insidious Chapter 2’ has no respect for its audience. This review has just as little for its subject.
Posted by Neil Fulwood at 9:19 PM

You know, this reminds me: I should start writing more pieces on films that I loathe. There's something particularly invigorating about tearing apart some piece of shit that deserves it.

Doesn't look like I'll be checking out Insidious any time soon.