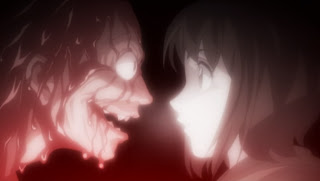 Based on Fuyumi Ono’s unfinished novel sequence and Shiho Inada’s ongoing manga series, ‘Ghost Hunt’ was a short-lived (one season; twenty-five episodes) anime that nonetheless managed to establish its characters and their interrelationships quickly and not without a certain degree of charm; whose best tales – there are eight individual stories comprising anything between one and four episodes – balance supernatural shenanigans with science and scepticism whilst maintaining an effectively creepy atmosphere.

The opening three-parter ‘Evil Spirits All Over?’ sets up the premise and most of the main characters: high school student Mai (voiced by Cherami Leigh in the English dub I watched) blunders into an investigation being run by the Shibuya Psychic Research team, an organisation headed by the youthful but appallingly pompous Kazuya (Todd Haberkorn) – whom she swiftly nicknames Naru the Narcissist – and accidentally damages an expensive piece of equipment. Kazuya icily informs her she’ll be working for him till she’s paid off the debt. (Kind of like ‘Ouran High School Host Club’ but without the rampant homoeroticism.) During her erstwhile case with the team, she’s quickly introduced to Kazuya’s right-hand-man Lin (J Michael Tatum), celebrity TV medium Masako (Jad Saxton), Buddhist monk Houshou (Travis Willingham), shrine maiden Ayako (Colleen Clinkenbeard), and a teenage Australian Catholic priest who’s improbably named John Brown (Jason Liebrecht). 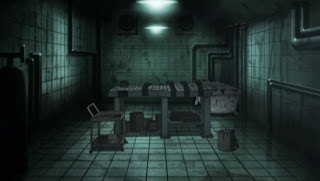 Lin’s as standoffish as Kazuya, Houshou quit his monastery to be in a rock ‘n’ roll band, Ayako acts more like a fashion model than the “temple virgin” she claims to be, John’s a happy-go-lucky surfer dude type who’ll break out the holy water and perform an exorcism at the drop of a hat, and Masako is precocious and frosty towards Mai, perceiving her as a rival for Kazuya’s affections. The absurdity of these characters and their participation in often very solemn narratives (‘Silent Christmas’ is almost unbearably poignant) provides a strand of humour that counterbalances the darker aspects of the show.

‘The Bloodstained Labyrinth’ – a title that wouldn’t be out of place in a roster of giallo faves has the team engaged as part of a forum of parapsychologists to look into recent disappearances in a rambling old mansion once occupied by a relative of a former prime minister. Kazuya opts to keep a low profile (for reasons that aren’t fully clear till later in the series, never mind this particular storyline) and invites former client Osamu (Eric Vale) to assume his role as head of the team. The mansion seems haunted from the outset: a genuinely creepy prologue suggests in quite blunt terms that more than one person has met a bad end there; a séance ends with the medium scrawling “I don’t want to die” over and over in automatic writing; members of the other teams go missing; finally, one of Shibuya Psychic Research’s own number disappears.

The mansion, Kazuya discovers, has been obsessively remodelled and extended over the years; moreover it rests on a floating foundation. The script acknowledges its borrowings early on, setting up a clear analogue with the Winchester Mystery House. This was a property owned by Sarah Winchester, the widow of the arms magnate. She had continual building work done on the place from 1884 until her death in 1922 at a cost of $5½ million (equal to around $80 million today). Perhaps as a result of the depression she suffered after William Winchester’s death, she came to believe that the incessant remodelling of the house would confuse the spirits of those killed by her husband’s weapons and thus keep her safe. 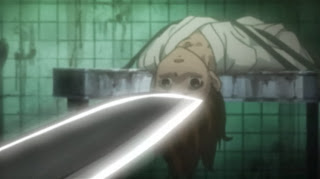 Applying this concept of collective guilt to a property owned by a former political leader gives ‘The Bloodstained Labyrinth’ an edge that’s not present in any of the other stories. Later, as revelations about the property’s history come to light, the historical touchstone is less American gothic than the Carpathian variety.
Dripping with imagery that is at one moment redolent of the classic haunted house movie a la ‘The Haunting’ and the next more in keeping with an Eli Roth production, ‘The Bloodstained Labyrinth’ is atmospheric plus VAT. To such a degree that the comedic moments, so natural and unforced elsewhere in the series, seem out of place here. The sprawling edifice of the mansion, with apparently endless corridors and rooms within rooms, gradually becomes a character in its own right – another trait of a successful haunted house story. The repeated refrain “I don’t want to die” takes on a different context as the final revelations are unveiled.

‘The Bloodstained Labyrinth’ isn’t necessarily the best starting place for anyone new to ‘Ghost Hunt’ – I’d advise watching the series sequentially: there are at least two character arcs that develop specifically through the twenty-five half-hour episodes – but it’s one of the high points of a notably consistent show; and with several forthcoming picks for this year’s 13 For Halloween continuing the haunted house bias of ‘Citadel’ (okay, haunted tower block) and ‘The Baby’s Room’ – and with a certain trilogy by one D Argento Esq on the radar – it was the ideal choice.
Posted by Neil Fulwood at 3:47 PM

this is actually the arc that stands out, ever since I saw it in 2008. Both the anime and manga version creeps me until now.