It would be fair to say to Michel Soavi has something of a pedigree in Italian horror. At the age of 25, he was second unit director on Argento’s giallo classic ‘Tenebrae’. A year later, he was assistant director to Lamberto Bava – another Argento protégé – on ‘A Blade in the Dark’. At 28, he directed the feature-length documentary ‘Dario Argento’s World of Horror’, and two years after that made his first feature film, the hyper-stylised but incredibly accomplished ‘Stage Fright’ (aka ‘Aquarius’, aka ‘Bloody Bird’). Over the next seven years, he made three more terrific horror movies: ‘The Church’, ‘The Sect’, and this evening’s consideration, ‘Dellamorte Dellamore’.

He then withdrew from the film industry for a decade to care for his son, who was suffering from a debilitating illness. His most recent work has been for Italian television, plus second unit duties on Terry Gilliam’s ‘The Brothers Grimm’ (he’d worked for Gilliam in a similar capacity on ‘The Adventures of Baron Munchausen’, back in the day when studios would happily give Gilliam large chunks of money to bring his imaginings to life).

‘Dellamorte Dellamore’ – which is both the protagonist’s surname and his mother’s maiden name, as well as a literal evocation of death and love – is based, nominally at least, on Tiziano Sclavi’s ‘Dylan Dog’ comic series. It sets out its stall in fairly generic, but entertaining fashion: Francisco Dellamorte (Rupert Everett) is the caretaker at the Buffalora cemetery, where he is assisted by Gnaghi (François Hadji-Lazaro), a morbidly obese simpleton who can only communicate in grunts and whose puppy-dog adoration of mayor’s daughter Valentina (Fabiana Formica) is demonstrated by barfing over her. Francisco’s relatively content with his lot in life, since the job – self-admittedly the only one he’s been able to secure – comes with living accommodation. Moreover, it’s better than living in town, where the local motorcycle gang take the piss out of him and spread rumours that he’s impotent. The only real downside to his life is that the dead have a habit of coming back to life five days after burial, whereupon Francisco has to shoot them in the head and re-inter them. 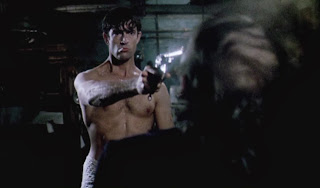 So far, so comedy horror. The humdrum routine of Francisco’s life is spelled out with beautiful economy in the pre-credits sequence where he alleviates the dull routine by chatting to his friend Franco on the phone while casually blasting the cranium off a shuffling zombie attempting to break into his living quarters. Everett’s deadpan performance is comedic gold, and perfectly in keeping with a film that’s generally played straight (apart from some slapstick involving Gnaghi).

Soavi makes the first of several narrative swerves with the introduction of a young widow (Anna Falchi). Francisco inexplicably bumbles his way into her affections – his persona veers between bored, louche, Byronic anti-hero and nervous teenager in these scenes – and they get down to a pretty hot and heavy bit of consummation on her dead husband’s tombstones. Or rather, undead husband, since his zombified corpse chooses this exact moment to stage its resurrection.

And here we come to the next narrative curveball. Events that I don’t intend to spoil for those new to the film leave Francisco in a state of emotional meltdown. This is juxtaposed with an hilariously bad taste accident that kills one of his biker antagonists, Valentina, and a coach full of boy scouts. Francisco’s abject loneliness and rapidly loosening toehold on sanity plays out against Gnaghi’s romantic idyll with Valentina’s reanimated but decapitated corpse, a romantic subplot that manages to be as poignant and delicately handled as one could reasonably expect from an amour fou between a slobbering man-child and a severed head. 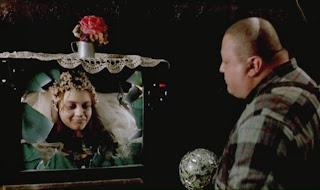 Meanwhile, a killing spree in town leads a detective more stunningly incompetent than any copper in any giallo to the cemetery, the mayor dies after discovering the truth about his daughter’s affair with Gnaghi, and his replacement turns up for a meeting with Francisco with his personal assistant (Falchi) in tow. Another romantic entanglement ensues when she confides to Francisco that the rumours of his impotence are a turn-on due to her phobia of the erect penis.

Did I mention that ‘Dellamorte Dellamore’ goes into some odd territory?

I usually distrust and try to avoid the ‘X’ is like ‘Y’ meets ‘Z’ school of film writing, but ‘Dellamorte Dellamore’ almost begs for it. So here goes: ‘Dellamorte Dellamore’ is kind of like ‘Night of the Living Dead’ meets ‘That Obscure Object of Desire’ while sitting down to write a love letter to ‘Vertigo’ and casually presupposing the utterly unreliable protagonist/narrator of ‘Fight Club’ as it cheerfully reworks one of the best absurdist set pieces from ‘The Phantom of Liberty’ and blithely helps itself to a key image from ‘Citizen Kane’ by way of its joltingly disorientating (but played fair: the clues are there) final scene.

It didn’t find much favour on its original release, either in Italy or the English speaking territories (Everett’s star wasn’t high enough at the time to guarantee it any real audience), but it’s endured. ‘Dellamorte Dellamore’ is frankly bonkers – its absurdist touchstones might be very specifically yoked to the work of Luis Bunuel, but there’s a strong evocation of Monty Python – and also, in places, genuinely creepy. The swirl of ashes from a bonfire that coagulate into the Angel of Death is a potent image, and the zombie boy scouts, all clacking teeth and earth-caked uniforms, make for an unsettling vision. Soavi’s conjuration of imagery is boundless: a sex scene shadowed by a carved angel that rivets together the death and love of the title; Valentina’s severed head starring in her own show in the interior of a functionless TV set; an office overflowing with files like something out of Gilliam’s ‘Brazil’; the riffling pages of the telephone directories in which Francisco crosses out the names of the deceased; a waterlogged necropolis lined with skulls; a road that terminates above a seemingly pre-historic landscape. 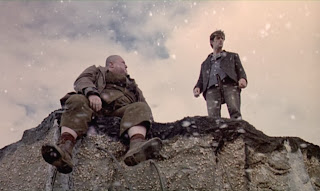 The humour is equally gnarly, particularly in Francisco’s attempt to convince a local doctor to castrate him in order to satisfy the mayor’s assistant’s sexless demands, spectacularly backfiring when a bit of rough sex from her employer cures her phobia, plays out like the tragic misunderstandings of the last act of ‘Romeo and Juliet’ as if reimagined by the ‘Carry On’ team. Elsewhere, the erstwhile mayor tries to maintain a sense of hierarchy after death, only to learn the perils of loss of office; a hospital visit escalates into multiple murder; and the last scene – nay, the very last line – slams home an almost unpalatable final joke.

‘Dellamorte Dellamore’ is a curious, chaotic piece of work, arguably a little too packed with ideas and satiric sideswipes for its own good, but it’s one of the most unique and offbeat offerings Italian horror cinema has produced, and I will go to my grave – and quite possible come lumbering back from it – maintaining that it represents Everett’s finest hour and three quarters.
Posted by Neil Fulwood at 10:07 AM

Excellent write-up, I thoroughly enjoyed reading this... and I like the multiple comparisons you make, especially to Bunuel. I need to revisit this one in some greater depth myself at some point as I felt I barely began to do it justice yesterday. I'll definitely be having a proper dig into your blog when I get chance and am looking forward to your future posts as well :)

Thanks, Simon. I enjoyed your comparison of 'Dellamorte' with 'Burial Ground', a film I haven't seen in ages. Andrea Bianchi is one of the unsung heroes of crass exploitation!

Digging your Halloween Hootenanny selections, as well. Apologies for not having left any comments over on your blog - mostly, I'm sneakily reading your reviews at work when I'm supposed to be, y'know, working.

Sorry I'm just now getting to this. I agree with your assessment that Soavi's film is, "arguably a little too packed with ideas and satiric sideswipes for its own good." I haven't seen the film for a couple of years, but that's what I remember about it, too. That's not to say it isn't one of the best examples of the comedy/horror hybrid, but I prefer earlier Soavi films to this one. Sometimes Cemetery Man gets a little too wacky for my liking, but for a '90s Italian horror, it's really damn good (and probably the best horror movie to come out of Italy during that time).

I'm really surprised someone hasn't tried to remake this here in the States. For all the remakes and reboots in the horror genre, Italian horror has been pretty much untouched. Perhaps the fanboy directors have too much respect for it (although I still want to see Tarantino remake Fulci's Murder to the Tune of Seven Black Notes, as he's claimed to want to do). Not saying I want a remake...just surprised that Italian horror has been left alone by a generation of filmmakers that watched it growing up on dodgy VHS tapes.

Cheers Neil :) and no problem... it's very cool to hear someone out there is actually getting paid for checking out my blog.

And Kevin, I couldn't agree more... who knows though, if Tarantino ever does that Fulci remake or the Suspiria remake ever gets made/finished etc (anyone know what the current status is on that one?), it could well open the floodgates, so to speak.

Nice work, bra. I only recently came around to this after being sideswiped by the genius of Stagestruck. The fat oaf and his terrible eating habits is a little much, but the rest of it does in fact rock, as does your cogent essay thereon.

Kevin - Tarantino remaking 'Murder to the Tune of Seven Black Notes' (even if it never comes to fruition, as I doubt his Len Deighton 'Game, Set and Match' in one film project even will) is definitely something to dream about. Hell, I'd probably even donate to a Kickstarter if it meant there was a chance of it.

Simon - last I heard, the 'Suspiria' remake was in the lowest circle of development hell and occasionally being prodded with a pitchfork.

Erich - yeah, it says something that fat dude/plate of spaghetti is by some distance the ickiest image in the whole film.