Thanks my good friend Bryce from Things That Don’t Suck for the following article. 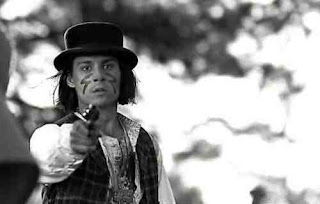 ‘Dead Man’ is an astoundingly pretentious movie. But don’t hold it against it.

Every now and again you come across a film that has seems not just odd but to have genuinely evolved along a separate evolutionary track. And that’s ‘Dead Man’ all the way, just your average Saturday Matinee on Alpha Centuri, where everyone watches B Movie Proto Mumblecore westerns that mix arch black and white style with, meandering quasi formed ideas about Native American Spirtuality and William Blake.

Even comparing it to Jaramusch’s other work offers little help. While his other movies inseredt sly signposts letting you know what level Jaramusch was putting you on, ‘Dead Man’ offers no such cheat sheet. Even comparing it to ‘Ghost Dog’, which has a similar schism between its offering of austere meditations on Bushido and its weird riffs on Seijun Suzuki and Tarantino, offers little help. It’s as if Jaramusch has gotten deeply invested in his mumbo jumbo, but is kind of embarrassed about it. It’s like having a conversation with someone who puts mocking air quotes around everything he says, and then concludes by going “Seriously though it was pretty deep.”

‘Dead Man’ follows Johnny Depp as a milquetoast accountant from Cleveland, who ends up on the run after killing the son of Robert Mitchum. Hunted by a gang of killers, and guided by the Native American Nobody who takes him for the (short lived) reincarnation of William Blake. However this makes the movie sound like it has a lot more form then it actually does. Most of the film consists of Depp simply wandering into weird shit. 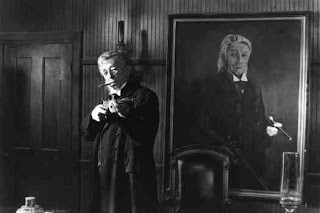 ‘Dead Man’ is at its best when it’s at its least self conscience, which isn’t often. There are the scenes with Robert Mitchum in full force of nature/wrath of God mode. Perpetually framed by a cheeky Jarmusch in front of stuffed Bears, Displays of guns, Giant Portraits of himself and other things that reflect what a bad motherfucker Robert Mitchum is. As well as the scenes following the trio of bounty hunters Mitchum hires to assassinate Blake, including a shockingly funny Michael Wincot, and Lance Henrikson as a man with more dark secretes then seem possible. Their sections resemble nothing so much as the laconic naturalistic bickering between the principles in the early Jarmusch masterpieces, like ‘Stranger Than Paradise’ and ‘Down By Law’. If one makes allowances for the fact that they occasionally kill people and eat one another. The particular punch line to their scenes is exceedingly dark.

This is one of those frustrating reviews. I know it doesn’t sound like it but I have some very real affection for this weird little mutant of a movie. Much like the Neil Young score that haunts it, the quality of ‘Dead Man’ all depends on your point of view. It’s either a sparse and haunting meditation, or as Ebert suggested the sound of a man dropping his guitar for two hours.

Then again who is to say that it can’t be both?
Posted by Neil Fulwood at 8:34 PM

I love this film and find it to have a real hypnotic mood... like if David Lynch decided to direct a western. Jonathan Rosenbaum is a real champion of this film and wrote a fascinating BFI book about it where he goes into detail about the Native American aspect of the film and how their depiction is quite revolutionary for a film made by a white man.

Maybe you would classify DEAD MAN as an acid western - in that case it would make a good double bill with EL TOPO or maybe RENEGADE.

It was my pleasure Neil.

@ JD: Or for that matter Rango. Which was incidentally the film that inspired me to take it off the DVD shelf.