Night of the Demons (remake) 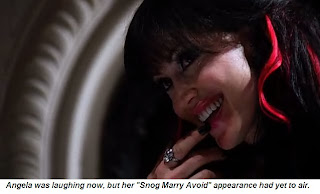 Which brings us to the 2009 remake of ‘Night of the Demons’ and your humble blogger leaning palely from his balcony crying, “Amelia, Amelia, wherefore art thou, Amelia?”

(But lest the venerable Ms Kinkade gets named in the Agitation divorce proceedings, let’s quickly answer that question and move on to an objective evaluation of the – sob! – Amelia-devoid sequel. A dancer and choreographer before she became an actress, Kinkade made another career move after ‘Night of the Demons 3’ in 1997 – her last onscreen appearance according to IMDb – and established herself as an “animal communicator” or “pet psychic” depending on which sources you consult. Since 2001, she has published two books on the subject – ‘Straight from the Horse’s Mouth’ and ‘The Language of Miracles’ – as well as touring and lecturing. Additionally, she’s an accomplished watercolorist and also writes and illustrates children’s books. Which is about as un-Angela a curriculum vitae as you could imagine!)

However, it’s 2010 and we’re talking ‘Night of the Demons’ for the Eli Roth generation with Adam Gierasch in the director’s chair and Shannon Elizabeth as Angela. Gierasch had previously directed the old-school horror/thriller ‘Autopsy’ (which boded well) after contributing to the screenplays for the ‘Toolbox Murders’ remake and ‘Mother of Tears’ (which didn’t). The jury was out before I even sat down to watch the film. 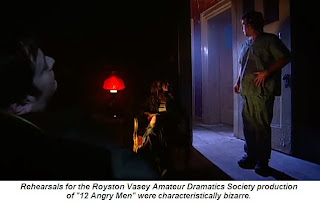 The jury was inclined to a “benefit of the doubt” mindset during the pre-credits sequence, a playfully executed prologue set in 1925 and shot like a silent movie, including title cards for the dialogue. Kudos to the filmmakers for getting their history right: the first sound shorts were made by the then-fledgling Warner Brothers studio, with the first sound stage being built in 1927 for the Al Jolson starrer ‘The Jazz Singer’.

Unfortunately, this is the only interesting thing the ‘Night of the Demons’ remake does.

Okay, here’s the set-up: Hull House is now the Broussard Mansion, where some strange yada yada yada took place in 1925 resulting in the deaths of blah blah blah and it’s now being rented by Angela, who’s hosting a rave there. Had this movie been made, oh I dunno a couple of years after the original, the idea of demonic shit going down at a rave might have held some interest. As it is, the movie already seems old hat before it’s barely started. The desperately attention-grabbing sequence where our heroines enter the Broussard place – all slow-down-speed-up-slow-down-speed-up – also seems hopelessly dated, as if you were watching a really naff MTV video from about 10 or 15 years ago.

Angela’s big introduction is when she addresses her guests (“hey, bitches”), recounts the dark history of the Broussard family, and exhorts the partygoers to set new standards of debauchery. Apparently, this is what passes for debauchery nowadays. The Marquis de Sade is doubtless laughing in his grave. 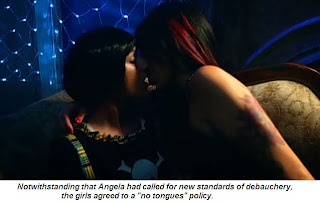 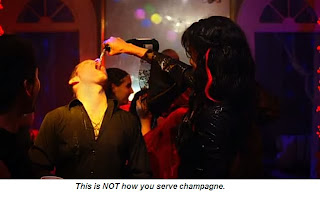 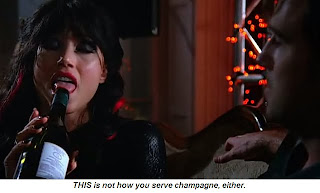 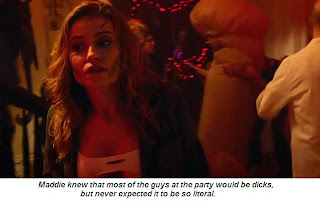 The proliferation of annoying teenage/twenty-somethings at Angela’s rave suggests that once our hostess gets possessed, entire swathes will be cut through the guest list – my already waning attention perked briefly – but then the police appear, break up the party and it’s it left to a handful of dullards who managed to evade the ministrations of the police to fend for themselves when things turn ugly.
Let’s meet the dullards. The script never makes it clear whether our trio of valley girl heroines Maddie (Monica Keena), Lily (Diora Baird) and Suzanne (Bobbi Sue Luther) are supposed to be teenagers or roommate twenty-somethings but all of them look a little too close to thirty for characters of this ilk. If you have difficulty telling them apart, by the way, Maddie’s the one in the non-slut Halloween costume, Lily’s the one in the slut costume and Suzanne’s the one in the uber-slut costume. I think. The only way to tell them apart is the amount of cleavage on display. 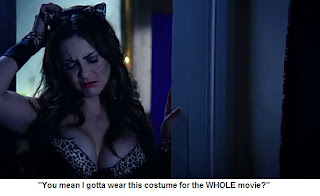 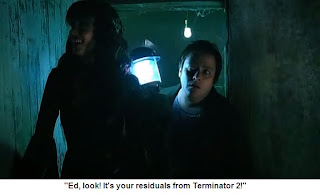 Colin is the pansiest and least convincing drug dealer in the history of cinema, thereby at least guaranteeing ‘Night of the Demons ’09’ some small place in the annals. Colin works for crime boss Nigel (Jamie Harris), who tawks wiv an Lahdan axcent (innit?) for all the world as if he’s trying out for the next Guy Ritchie film.
Can I just say: a drug dealer called Colin and a crime boss named Nigel – what the fuck is this, a lost Dud and Pete sketch from the late Sixties?!?! (“ ’Ere, Col?” “Wot, Nige?” “Got the mahney from flogging me drugs, Col?” “Fahnny yew should menshun that, Nige, yew’d nevah belief wot ’appened to me!”)
So. The Three Valley Girls, the Two Useless Boyfriends and Colin The World’s Worst Drug Dealer find themselves trapped in the Broussard Mansion after the cops leave. They accidentally awaken a demon, you’d never guess what happens to Angela, and an hour of tired genre tropes ensues. There’s a couple of visual references to the original film (including a cameo from Linnea Quigley), the cat costumes Lily and Suzanne wear (you know, the slutty and the uber-slutty costumes) are a nod to ‘Night of the Demons 3’, all the brouhaha about the history of the Broussard family and a late in the game plot device about a room protected by spells are reminiscent of ‘The Skeleton Key’, there’s some ‘Evil Dead’-stylee cellar door business, the old arms-out-of-walls trick used in everything from ‘Repulsion’ to ‘Day of the Dead’, and a message-hidden-under-a-dislodged-layer-of-plaster revelation that’s so blatantly ripped off from ‘Deep Red’ that Gierasch may as well just have run in front of the camera and yelled, “Please don’t sue me, Dario!” 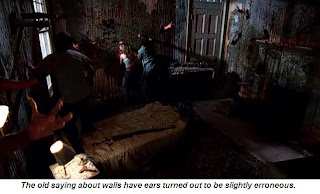 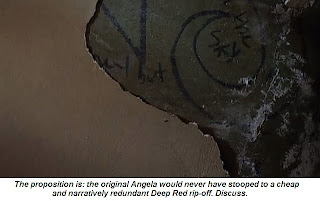 It’s a hodge-podge. A mess. And it’s pointless. The original trilogy had a combined budget that was $2 million less than Seven Arts stumped for this joyless endeavour. As cheesy as the originals were, they at least gave us a memorable villainess. Shannon Elizabeth’s Angela is just plain dull, the actress bringing none of the spark that she did to ‘American Pie’.
Here’s lookin’ at you, Amelia. We’ll always have Hull House.
Posted by Neil Fulwood at 6:36 PM

Ha ha ha ha...Iron Maiden without Bruce Dickinson...Blaze who???!!
Well after your reviews I don't think I'll be in a hurry to see any more NotD films.
The first one was rubbish but one thing I forgot to write when I posted a comment on it was the opening credits.
What a cool way to open a film. The animation was excellent with crosses, fireplaces and animated demons all over the place. Quite memorable and the best part of the whole movie as it went down hill rapidly from there!
Maybe the whole thing should have been animated!!

The second sequel has an animated opening sequence, as well. Again, it's arguably the best thing about the whole production!

As far the remake, it would have been a far better film all round if the entire thing had been animated!!

night of the deoms 3 aptley
titled demon house for the uk
was comedy horror at it's finest
each cast member was brilliant
i loved all the performances
and the costume for stephanie bauder was hypnotique and i loved
that costume she wore but the intro was great because of the cgi
animation that went into creating it because back in the 80's would haved being concieved opiticaly but
it was great with a great movie theme tune as well .