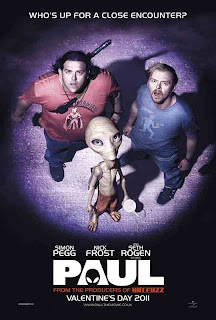 Use the phrase “the new Simon Pegg and Nick Frost comedy” and immediately you find yourself with an elephant in the room. Two of them, in fact. ‘Shaun of the Dead’ and ‘Hot Fuzz’. Both razor sharp and wickedly funny riffs on all-too-familiar genres (the zombie movie; the crime thriller) and not only send up their pop culture touchstones but vigorously revitalize them.

‘Paul’ could easily come off as the lesser sibling to these terrific, out-of-nowhere contemporary classics. Which is why it’s important, right from the off, to point out the crucial difference, as obvious as it may be: Edgar Wright has nothing to do with ‘Paul’. Unlike ‘Shaun’ and ‘Fuzz’, he’s not in the director’s chair. Unlike ‘Shaun’ and ‘Fuzz’, he didn’t co-write.

Instead, Pegg and Frost share the writer’s credit, while Greg Mottola calls the shots. I’m going to make the only ‘Shaun’-‘Fuzz’-‘Paul’ comparison of this article and make the observation that, on the evidence provided, it seems to be Edgar Wright who gives the earlier films their bite (and let’s face it, between the laughs, both ‘Shaun’ and ‘Fuzz’ have something of a mean streak). Take him out of the equation and the comedy is a tad gentler, more warm-hearted.

But with lots of swearing.

Seriously, ‘Paul’ is a wonderfully sweary movie. In particular, the line “Yo, fucknuts, it’s probing time” has automatically become one of my favourite movie quotes. 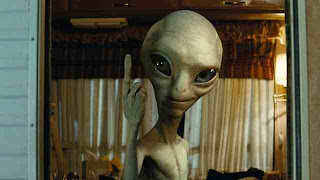 ‘Paul’ starts out as a sort of anti-‘Spaced’, a love-letter to its protagonists’ nerdiness, rather than a send-up of their social ineptitude. Scenes of Clive Gollings (Frost) and Graeme Willy (Pegg) – respectively the writer and artist of a graphic novel involving an alien with three tits – noodling nerdily around Comic-Con and being mistaken for a gay couple at their hotel are wincingly unfunny and get things off to a decidedly shaky start.

Things pick up big time when they hit the road in a hired RV and head along Route 375, the so-called “Extraterrestrial Highway”. Another slice of nerd heaven for our boys, with stop-offs at the Little Ale’Inn (where they piss off a couple of rednecks) and the Black Mailbox (which they discover is white). They also discover a little grey individual, an otherworldly type with the ability to heal by touch and turn invisible while holding his breath. Named Paul – you’ll find out why in the opening sequence – and voiced by Seth Rogen, he’s a foul-mouthed, cynical, sarcastic alien with a penchant for dope, booze and hard partying. He’s the single best thing about the movie.

If, like me, you were starting to wonder if the Seth Rogen bubble was on the verge of bursting, then be jubilant. Acting with his vocal chords only, Rogen does his best work since ‘Superbad’. Funnily enough, like ‘Superbad’ (another ostensibly low-class but actually quite sweet comedy), ‘Paul’ is directed by Greg Mottola. He’s the film’s other great asset. Directing in an almost classical style (but allowing for chases, shoot-outs and a moment of utter wrongness where Paul’s admonition to “take your hands off my motherfucking junk” elicited the biggest laugh at the screening I attended), Mottola instinctly taps into the Spielbergian homages writ large in the script. Mottola also brings back Rogen’s ‘Superbad’ alumnus Bill Hader as one half of a spectacularly incompetent pair of Feds out to catch Paul and haul him back to Area 51. Rounding out the cast are Jason Bateman as their considerably more proactive colleague Agent Zoil (the matter of his first name is one of the film’s more groan-worthy puns) and the excellent Kristen Wiig as Ruth, an optically-challenged Bible-basher. Her anti-creationism worldview blown apart by Paul’s existence, she makes a swift u-turn and decides to reinvent herself as a potty-mouthed bad girl. The results are priceless. Jeffery Tambor and Blythe Danner are memorable in small roles.

Narratively, there’s nothing particularly original going on, and Pegg and Frost’s characters aren’t quite as on-the-money as their ‘Shaun’ and ‘Fuzz’ personas (or even their ‘Spaced’ personas), but there’s no denying that ‘Paul’ provides 90-minutes of laugh-out-loud feel-good entertainment.

Finally, finally, Paul has got its little alien butt down under!! IT certainly has go the 'elephant' hanging over it's head hasn't it, because it would always be compared to SOTD and HF. Paul isn't bad but it did lack the zing of its older siblings though. Believe it or not I was virtually the only one laughing through it in a theatre that was almost full. Must have been an off night for the patrons as I found it an hilarious ( if not a somewhat shakey and flawed ), enjoyable way to spend 90 minutes or so.