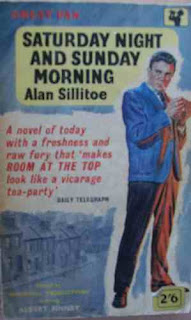 Oh no Neil!!...are you telling me Arthur reminds yourself of him because you are the bastard that pukes of people in the pub on a Friday night??!!!!!!!
I've never heard of Allan Stilletoe so this was quite an interesting read.

I can say with my hand on my heart that I've never spewed on anyone in a pub, though a friend of mine tossed his cookies on a barmaid once, leaving me to hustle him drunkenly out the establishment in question before the publican gave us both a thick ear.

I've never carried on with a couple of married women either. My wife would have my extremities in a rat trap if I even thought about it!!!

No, Arthur reminds me of me in his belligerence in the face of know-all authority figures and his determination to be true to who he is even though it doesn't make him the most popular bloke.

I'm kind of glad Arthur is (a) fictitious and (b) contained in the late 1950s, because he'd go off at the deep end if he had to live in today's corporate, incentivized, brand-driven society. Either that, or he'd join Fight Club ...

Ah yes the old 'true to yourself even if it doesn't make you popular' syndrom. Believe it or not I suffer from the same thing!
It is not a matter of being rude or an arsehole, its being yourself for yourself and not being anything else to suit others.
Well said!!