Night of the Demons 3

Apologies for the snarky captions. 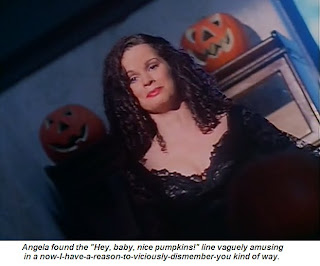 Angela’s third outing sees Kevin Tenney back on board – not in the director’s chair this time (that honour goes to Jimmy Kaufman, someone I’d not heard of before and who, accordingly to IMDb, has worked mostly in television) – but as writer and editor. His editing is passable.

It is better that we do not speak of the script.

We must, however, waltz through a synopsis, so here goes: nice girl Abbie (Patricia Rodriguez) and her popular cheerleader gal pal Holly (Stephanie Bauder) are headed for the high school dance when their car breaks down. They are offered a lift by five loose cannon teens in a black van, four of whom are male, none of whom are take-home-to-meet-your-mother material and one of whom is perpetually spoiling for a fight. Notwithstanding the inadvisability of two young women, one dressed in a catsuit, the other wearing a dancing girl costume, clambering into a black van driven by anyone (and let’s face it, short of the van having a personalized licence plate reading RAP 15 T, their chances of safe passage couldn’t be any lower), they accept said lift and off our group of unlikeable teens go, their misadventures encompassing the first half hour of the film and leading them inevitably to Hull House. 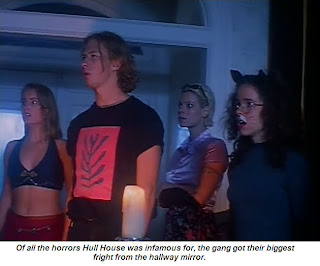 Let’s quickly introduce the tossers protagonists in the van. We have the slightly dweeby Orson (Christian Tessler), the token black character Reggie (Joel Gordon) who basically fulfils a similar requirement to Rodger in the first film only that was made in the 80s and you’d think a more reconstructed approach to casting would have been prevalent when ‘NotD 3’ was made in 1997, the brooding tough guy Nick (Gregory Calpakis), the perpertually spoiling for a fight Vince (Kris Holdenreid) and Vince’s smart-mouthed trashy girlfriend Lois (Tara Stone), a thoroughly loveless individual who gives the impression of having been round the block so many times they named it after her.

A week ago, I reviewed ‘Frozen’ and renamed it ‘Three Douchebags on a Chairlift’. I take it back. Joe, Dan and Parker from ‘Frozen’ are the loveliest, cuddliest, most sympathetic characters in all of moviedom compared to Orson, Reggie, Nick, Vince and Lois. Anyway, ‘Night of the Demons 3: Five Douchebags in a Van’ continues with said individuals pulling into a Quicky Mart (I had visions of Apu from ‘The Simpsons’ warning them “Please do not be going to Hull House, Angela has such dark powers as to make the Buddha weep. Thank you, come again”), getting into an altercation with the clerk and the situation spiralling out of control as two cops wander in. An admittedly well choreographed bit of gunplay ensues, after which the Five Douchebags (sounds like a white trash can’t-count version of a barbershop quartet: “Ladies and gentlemen, the Five Douchebags”) go on the run, with Abbie and Holly forcibly taken along for the ride.

Unfortunately – or maybe fortunately, since by this point I was aching for Angela to supernaturally fuck their shit up big time – one of the cops gets off a shot that punctures the gas tank and the resulting loss of fuel deep-sixes Vince’s fast getaway plans. So they decide to hole up at Hull House. (Parenthetically, how come, in movies, a car can impact against a tree and go up in flames, yet a bullet – travelling at, say, 900mph assuming it was fired from a .357 – can puncture a gas tank without, you know, igniting it and blowing the van to fuck?) 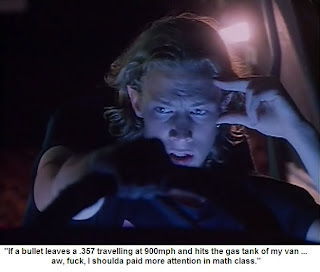 Once at Hull House, Angela makes an immediate appearance (this is the only film in the series when the marvellous Amelia Kinkade gets top billing) and Vince, all macho posturing and a pump-action shotgun in his hands, makes the righteous mistake of ordering her about and calling her “bitch”. On the scale of stupid, this is a couple of rungs above telling Evander Holyfield he hits like a girl and inviting him to take his best shot. Or going hunting with Dick Cheney.

Angela happily turns the teens’ defining characteristics against them. The wimpy Orson, who tries to act the big man to impress Vince, learns his lesson about the consequences of trying to hold Angela at gunpoint … 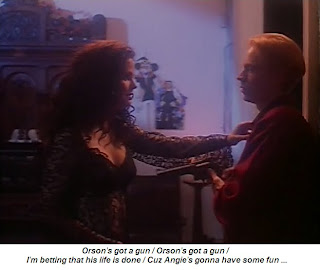 … while Abbie, jealous at Holly’s looks and popularity and secretly attracted to bad-boy Vince, is turned into a man-eating vixen … with the minor side effect that she also becomes a demon. As for Lois, who spends the movie spitting out bitchy remarks and wearing a sock puppet made up to look like a snake, well … bad fashion choice, toots.
Meanwhile, the two cops have survived the shoot-out and reported in. Lieutenant Dewhurst (Vlasta Vrana – the Rip Torn of B-movies) gets on the case. Dewhurst has two hours left on the force but would rather see them out on duty than at his retirement party. Anyone want to put money on his chances of getting to the end credits alive … anyone? Anyone? 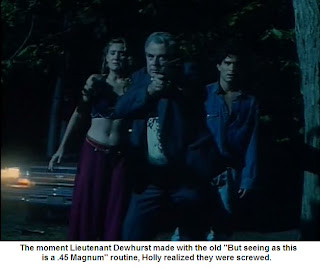 On the one hand, ‘NotD 3’ provides the nudity- and gore-filled guilty pleasures that are requisite for this kind of movie, and at 85 minutes it’s a brisk watch. On the other hand, though, there’s none of the gleeful bad-taste joie de vivre that informs part two – specifically, there’s nothing as cheesily entertaining as the Sister Gloria/Angela smackdown that ends Trenchard-Smith’s film on such a bat-shit crazy high note. Also, it’s obvious that a different location has been used for Hull House and it’s nowhere near as run-down, shadowy and gothic as the original.
In the final analysis, you get more Angela for your money – and, damn, Kinkade still looks hella good in a black dress – but, as with the first film, she’s the only element that makes it worthwhile.
Posted by Neil Fulwood at 10:42 PM

Never went further then the second one with this series, maybe I'll watch this one come next halloween, just for kicks.

Just about worth it for Amelia Kinkade. Although I gotta be honest - the most fun I had with the movie was making up the sarcastic captions for the screengrabs.