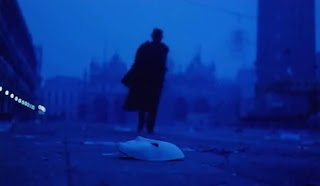 Given that the last Ruggero Deodato title I approached was ‘Cannibal Holocaust’, I settled down very nervously to watch ‘Phantom of Death’. Please, no wholesale animal slaughter, I prayed as the opening credits commenced.

Fortunately, there were no snake, turtle or monkey eviscerations, although I did have to sit through Michael York doing the worst impersonation of a concern pianist ever committed to film. York plays Robert Dominici, an ivory tinkler of the classical persuasion. He’s involved with but unable to commit to the gorgeous Susanna (Mapi Galan) and lusted after by wealthy fashion designer Helene (the uber-gorgeous Edwige Fenech). Poor bastard – must be terrible for him. 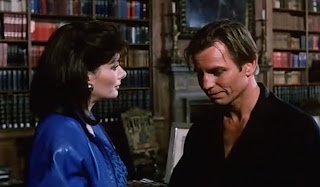 As if decreed by the bit of cheap sarcasm in that last paragraph, things do get pretty awful for him very quickly. Susanna is murdered, the second victim of a brutal killer who has very recently despatched specialist consultant Dr Carla Pesenti (Carola Stagnaro). This inaugural killing is intercut with Dominici’s recital and sets up an interesting aesthetic: a very formal, slightly detached directing style punctuated by Argento-like set-pieces defined by prowling, subjective camerawork and grand guignol violence.
My very poor understanding of Italian translates the indigenous title, ‘Un delitto poco comune’, as something like ‘A Small Community of Crime’, which is an unwieldy title but one that contributes to the misdirection Deodato puts in place for the first half hour. With Dominici as a successful and acclaimed musician, the luckless Dr Pesenti an expert in her field, and the soon-to-be-in-danger Helene the head of that sooooo giallo of institutions, the fashion house, ‘Un delitto poco comune’ is the first indication that here we have a group of affluent types whose lives are under threat, either from a someone with a grudge, or an individual within their midst. 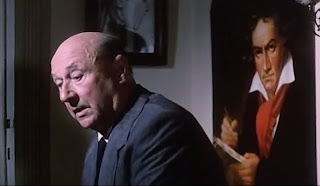 Added to this, Deodato throws in any number of expected genre tropes, from the bumbling copper, Inspector Datti (Donald Pleasance) seemingly unable to prevent each successive murder, to enough in the way of spiral staircases, rickety elevators, heads plunged through decorative glass, sharp instruments flashing in the dark, geysers of blood and non-linear editing to suggest ‘Phantom of Death’ was made in the glory days of the giallo and not a decade and a half later in 1988.
In fact, Deodato’s manipulation of his audience’s knowledge and expectations of two decades of gialli is the film’s biggest asset. For the first thirty minutes, you sit back comfortably convinced that Dominici is being established as the Sam Dalmas or Marc Daly du jour, the reluctant hero in the wrong place and the wrong time who’ll be required to turn amateur sleuth when Inspector Datti’s incompetence puts him in danger.
Not so. Deodato whips the rug out in commendably effective style with an hour still to go, shifting the focus to Datti and ramping up the tension as a cat-and-mouse game between cop and killer plays out, with Datti’s good-natured daughter Gloria (Antonella Ponziani) a potential victim and Helene’s role complicated as events take another unexpected turn. 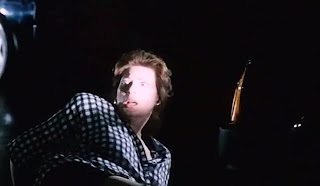 Unfortunately, the English language title provides a heavy-handed clue from the outset (take the first two words, factor in the importance of musicianship, think of a very similar title in literature and film, and bear in mind the disfigurement of that anti-hero), the performances are all over the place (York chews the scenery like it had just got five stars in the Michelin Guide, Pleasance drifts through each scene on autopilot, and Fenech valiantly strives for more than the script gives her), and the dialogue is often embarrassingly bad. Particularly when Inspector Datti speculates “Why would anyone kill a doctor? Hmmm? Ah? Unless [pregnant pause] they had something to hide.”
Also, the film is riddled with inconsistencies. A file is stolen from Dr Pesenti’s office and yet a crucial appointment is noted in her diary, but Datti never thinks to cross-reference them. Dominici keeps fit by training with an oriental fencing expert – what the fuck??? A concert pianist engaging in a physical activity that could damage his hands?!?!?
But there are also plenty of genuinely creepy moments (the most effective involving nothing more than a peripheral character on a swing), as well as an unexpectedly melancholy subtext about mortality, the existence of God and, if He does exist, the cruelty of His grand design. ‘Phantom of Death’ is half-and-half an extrapolation of Argento-style aesthetics and an inquiry into what a giallo directed by Ingmar Bergman would be like.
Posted by Neil Fulwood at 5:05 PM