GIALLO SUNDAY: Hatchet for the Honeymoon 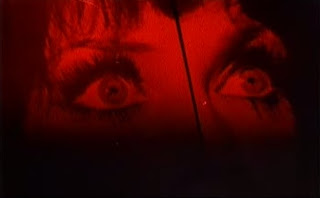 The Italian title of Mario Bava’s all-purpose giallo/psychological mystery/tale of ghostly revenge is ‘Il rosso segno della follia’, which translates as ‘The Red Mark of Insanity’. It’s a more appropriate title, given that the film spends most of its hour and a half run time probing the broken mind of protagonist John Harrington (Stephen Forsyth). The better known English language title, while magnificently lurid, is glaringly inaccurate.

It’s a cleaver Harrington does his killing with, not a hatchet. Totally different implements. No hatchet misuse going on in this movie whatsoever, no siree.

What’s that? I’m a rotten bastard and a no-good review for throwing out that last paragraph without a spoiler alert? Au contraire: it’s not a spoiler. Bava reveals Harrington as the killer right from the off, and just as quickly establishes his motive. He’s murdering newly married women and each time he kills, another little piece of a buried childhood memory comes back to him. A childhood memory that may be at the root of his desire to kill. 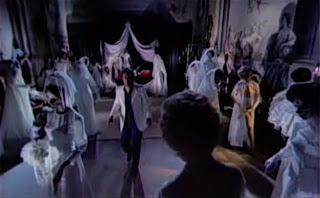 Granted, this kind of locks him into a self-defeating pattern – and regular appointments with mental health professional would certainly have been a better way to resolve the problem – but, hey, you can dig why Harrington wants to get to the bottom of things. Getting this little issue sorted out would certainly allow him to focus his attentions more on other things, such as running his fashion house (shades of Bava’s earlier ‘Blood and Black Lace’) or trying to talk his shrewish wife Mildred (Laura Betti) into an amicable separation. Yup: John is experiencing a problem akin to that of Stefano in ‘The Designated Victim’, Marco in ‘Death Laid an Egg’ and Martin in ‘The Red Queen Kills Seven Times’: a wife he can’t get rid of who wields both the whip hand and the purse strings.

But whereas Stefano, Marco and Martin simply want rid of their wives in order to be with other women, Harrington – for all that he’s attracted to models Alice (Femi Benussi) and Helen (Dagmar Lassander) – wants to wrest back financial control of the company his mother left him. It’s his mother’s death, gradually revealed in flashback, that’s at the heart of Harrington’s childhood trauma. Mildred, older than Harrington and as sharp as a stern parent in the way she talks to him, seems to be a mother figure – that is, if you take your mother figures straight out of the Brothers Grimm. Moreover, Mildred’s first husband was called John and her cries of “John … John …” at a séance (a scene that prefigures a key moment in ‘The Night Evelyn Came out of the Grave’, made the following year) are eerily similar to Harrington’s dying mother calling out to him in the flashback sequences.

‘Hatchet [’s a fucking cleaver, all right?] for the Honeymoon’ is a slow-burn movie that, by and large, doesn’t peddle quite the same baroque stylizations and tense set-pieces as ‘Blood and Black Lace’, but it’s fascinating and eminently watchable for several reasons. Firstly, it sees Bava at his most Hitchcockian since ‘The Girl Who Knew Too Much’: the upfront revelation of the killer’s identity and the crafting of exquisitely tense moments despite this playing of the hand was something Hitch did par excellence (think ‘Shadow of a Doubt’ or ‘Frenzy’); the quasi-Oepidal confusions of the protagonist are a variation on Norman Bates’ mother fixation in ‘Psycho’; and a squirmly protracted scene involving a corpse on the stairwell, a reflective surface, the dripping of blood and a spectacularly ill-timed visited from dogged detective Inspector Russell (Jesus Puente) is played out with as much panache as anything in the maestro’s filmography. 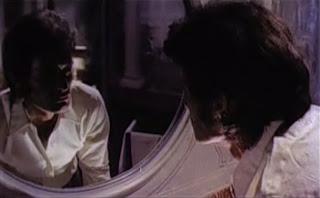 Also, Bava plays with reality/perception/memory like a cardsharp shuffling a deck. Reflections, flashbacks, shadows, things seen and unseen. Watching ‘Generic Sharped-Bladed Instrument for the Honeymoon’, you’re never sure how much is real and how much in Harrington’s mind, particularly around the two-thirds mark when Harrington is haunted in manner that brings to mind a classic M.R. James ghost story. There’s also a beautifully handled transition early on when Bava cuts from a train – the scene of the first murder – thundering through the night to an obviously false shot of model train carriages. At first it seems as if Bava’s tried to get away with matching stock footage to a cheaply-effected close-up, then the director pulls back for the reveal: it’s a genuine model railway layout in Harrington’s old childhood bedroom, the first of two significant scenes which see the troubled Harrington surrounded by the things of childhood. It would take Argento’s masterpiece ‘Deep Red’ before the giallo depicted childhood mementoes in as fetishized and sinister a manner as Bava did here.

The English language title does ‘Il rosso segno della follia’ a disservice, perking anticipation for a sleazy and sexualized stalk ‘n’ slash opus. What Bava actually delivers is a well-thought-out, eye-on-the-ball piece of work that continually monkeys with your perceptions and expectations and proves as inarguably as ‘Blood and Black Lace’ or ‘A Bay of Blood’ just how important his contribution was to the genre.