GIALLO SUNDAY: In the Folds of the Flesh 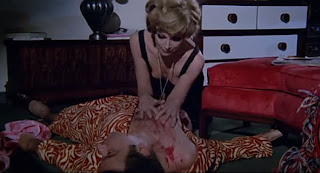 Sergio Bergonzelli’s sort-of giallo commences in fairly generic, albeit elliptically edited fashion, as an escaped criminal fetches up at a large and isolated house where a women who may be the matriarch or the governess is burying a decapitated corpse. The police turn up and our fleeing felon is re-arrested. Our corpse-interring femme fatale manages to get the job done in time and evade suspicion. A couple of children witness the evening’s activities.

I was confused, throughout this brief prologue, as to whether Bergonzelli was striving for a subversion of genre tropes by means of visual non sequiturs and a total disregard for conventional mise-en-scene, or whether he just couldn’t direct worth shit and didn’t know how an editing machine worked. This sense of polarity permeates the rest of the film.

Fast forward thirteen years and we have the matriarch or governess, Lucille (Eleanora Rossi Drago) still resident at the isolated old house, which for some reason has a fucking howitzer in the garden … 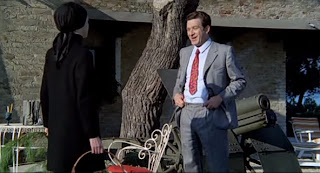 … and trying to care for the now grown-up but utterly dysfunctional children, Falesse (Pier Angeli, credited as Anna Maria Pierangeli) and her brother who I’ll just call Bro for the purposes of this review since it’s been a fortnight since I watched the film, I’ve forgotten the character’s name, I didn’t recognize the actor and IMDb is kind of sketchy on this one. Anyway, Falesse is psychologically disturbed, having flashbacks to the night she killed her father after he attempted to sexually assault her. The whole incest/sexual trauma angle doesn’t, however, stop her flouncing around the house in any number of slinky outfits and getting rather too cozy with Bro.

One day, a former associate of Falesse’s father – who we learn was a gangster type – turns up and makes himself at home. There is an immediate antagonism between him and Bro, particularly when Associate Dude (yeah I know, I really should have took notes) takes a fancy to Falesse. For a very short period of time, we’re on familiar ground: it’s Associate Dude vs. the Fucked Up Family in a psychological cat and mouse game which will surely culminate in the resolution of what happened to Falesse’s father and what Associate Dude’s ulterior motives are. 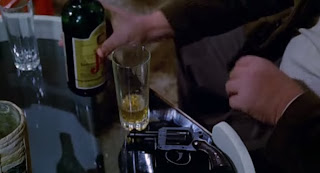 Then this plot strand is abruptly curtailed and, whaddaya know, here’s Pascal (Fernando Sancho) – our on-the-law-but-sent-back-to-clink bad dude from earlier. He’s out of the slammer now and out for a little blackmail. He breaks in at gunpoint and ‘In the Folds of the Flesh’ takes a swift and unsignposted turn into home invasion territory. Then Bergonzelli pulls the rug again and the supposedly dead gangster turns up claiming plastic surgery and the passage of time to account for the fact that he looks completely different. But is it even him?
By the time the denouement – a mishmash of cod Freudian psychology, police procedural tropes, last-minute revelations, concentration camp flashbacks, nonsensical screeds of exposition and soap opera histrionics – rolls around, odds are you’ll probably be too baffled to care. ‘In the Folds of the Flesh’ obviously wants to be trippy, mysterious and outré, a puzzle-box of a movie wrapped in psychedelic colours. Much of the time, however, it just comes off as pointless. The mid-section, dealing with Pascal’s blackmail attempt, demonstrates a ridiculous degree of complicity on the part of Lucille and her brood. The overacting has to be seen to be believed. 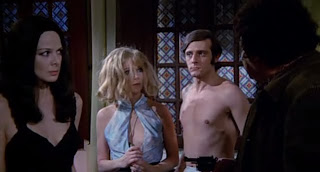